I Wish I could rename this dip. No one in Central NJ calls a Sub sandwich a Hoagie, but Sub Dip sounds kind of weird and not very descriptive. So I am trying to come up with a new name…..because I will be making this dip A LOT!!!!! I have had a similar recipe printed out for about 2 years and never found an occasion to make it. So when I saw this similar recipe in Foodnetwork Magazine I decided I needed to find a reason to make this dip. 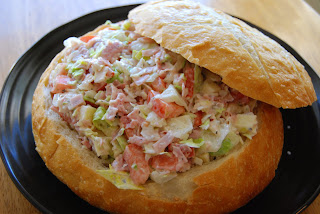 Chop the onion, pepperoncini, lettuce and tomato into bite-size pieces.

Dice the meats and cheese.

Combine the chopped vegetables, meats and cheese in a large bowl.

Add the mayonnaise, olive oil, oregano, basil, red wine vinegar and red pepper flakes and stir until everything is all mixed up and tasty.

Refrigerate until ready to serve.

Carve out the center of the bread loaf to make a bowl (don't cut through the bottom) and cut the scraps into bite-size pieces.

Serve the hoagie dip in the bread bowl, with the extra bread and hoagie rolls to scoop it up. Yummers!

*** I did all the chopping of the meat & cheese, tomato & pepperonici the night before and then did the lettuce and the mixing that morning. Worked out perfect. ***

So take this too a party and let the compliments be poured upon you. It was so simple and it looks super cute in the bread bowl. It was really tasty too. I might omit the onions next time because raw onions make me burp (oops TMI) and I burped them the entire day. I don’t think you would miss them at all. But it’s a personal choice. Try them with and see if you are a burping monster. It might have been the alcohol too, so I cant really be a good judge on this particular day. I seriously loved this dip and it killed me to throw out what little was left after we inhaled it. Just writing about it makes me want more.